ARSON – Arson is a very serious crime in every county throughout the State of Texas. It can be perpetrated for a number of reasons. 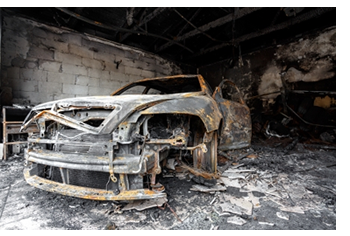 Financial gains, to get rid of an expensive vehicle one can no longer afford, get rid of a lemon, jealousy, divorce, cheating, retaliation, or to collect on a fraudulent insurance claim.

These specialized knowledge and skill levels are essential to reducing what can be a very technical subject down into layman terms so that the judge and jurors do not become confused.

TYPICAL VEHICLE FIRES
Battery Fires – Battery Fires can be caused by a short battery in the primary (+) side to the ground (-) side or by a high resistance.

Alternator Fires – Alternator fires can be caused by overheating due to a battery that is shorted. A hard failure of the diode bridge, windings, or other Non-OEM components. With the vehicle parked and in the engine turned off, the alternator can catch on fire if the diode bridge is allowing some reverse current the field windings.

HVAC & Electrical Motor Fires – The greatest failures of electric motors fires are typically caused by the propensity to heat up the circuit as the friction on the armature increases with wear. With Computer Controlled Automatic Air Systems with the HVAC computer controller in the dashboard can fail internally leading to a fire.

Electrical Switch Fires – Electrical switch fires are caused by overheating due to too much current flow. The switch will heat up and melts internally. Another type of fire is caused when the switch grounds internally.

Power Distribution Fires – Electrical systems, fuse and relay panels suffer deterioration at the connections and relay contacts. With age, these connections naturally loosen due to mechanical vibration. The normal arcing will cause resistance in the circuit leading to circuit meltdown. Electrolysis occurs when two dissimilar metals are brought together in the presence of electricity. If the connection or relay contact builds sufficient heat to cause a meltdown, a fire is likely to begin.

Electric Seat Tracks and Seat Heaters – Many midline and luxury vehicles are equipped with these features. If the motor armature jams, then the circuit will begin to heat up and catch on fire. Debris and dust from passenger operation can accumulate in the track grooves. Lubricated seat tracks become gummy with age. This can cause the seat motor armature to drag. If the main power feed for the seat motors can dislodge from the original anchoring and become pinched in the track causing either high resistance or shorting to the ground. Sometimes the SRS systems will fail internally allowing the airbag module to heat up resulting in a fire.